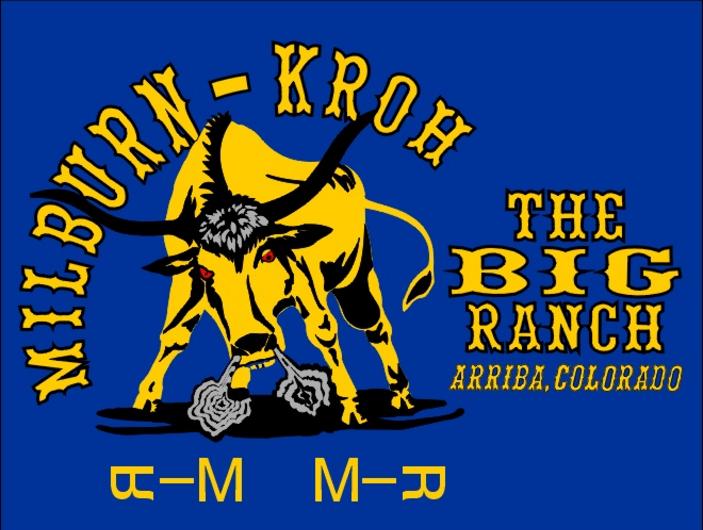 In 1997, my late wife Carla and I moved from Grand Junction to Arriba, CO, to get closer to our family and our roots. Carla grew up in
Deer Trail, and I started life in Arriba. What began as the Cactus Ridge Ranch on the Western Slope of Colorado became the Milburn-
Kroh Ranch on the Eastern Plains. We started raising cow/calf pairs on a quarter-section of decent grass just north of town. With additional land purchases and leased/rented ground, we grew to almost 1,000 acres by 2012. Not quite 66 years earlier, in 1946, my grandfather moved his family
from western Kansas to a ranch south of Arriba, Colorado. After nearly 30 years, he sold the place when he retired. In 2012, Carla and I
bought back the "old Milburn ranch" and moved the entire operation to the home place. One hot August afternoon in 2014, we were hit by a tornado. It took half of the equipment shed, the windows and doors to the shop, and pretty much destroyed what was left of the original barn built in the early 1900's. I took it as a message from God: "Either get serious or get out of the way". Since then, we have repaired the shed, built a new barn, started the home-raised beef business, and began selling Roto Grind feed and grain grinders.

The Milburn-Kroh Ranch is a Beef Quality Assurance (BQA) certified producer of quality, home-raised cattle. Through this
certification process, we are able to ensure proper management techniques and a commitment to quality throughout every segment of
our process. As cattle are moved out of our production herd, they are custom finished to produce high quality home-raised hamburger. As
demand has increased, we are slowly moving toward custom finishing all of the cattle produced here on the ranch. Our capacity is limited due to the amount of pasture available to us. As the result, our cattle are housed in the feedlot here on the home place for roughly five months out of the year. We "go to grass" and start calving in April. The pairs return home in November. We pay a tremendous amount of attention to our winter-feeding programs. Working closely with various Feed/Nutrition Specialists, we are able to maximize this portion of our production process.

We grind great amounts of feed. Every pound goes through our 30-year-old Roto Grind grinder. "Old Faithful" is on the third set of
hammers and still grinding like it was brand new. It's been tipped over, shot at, and pulled a thousand miles. I can't seem to wear it out.
I was so impressed with Roto Grind that I acquired dealership rights to Southeastern Colorado in 2016. I now sell Roto Grind grinders
in Colorado, Kansas, Wyoming, Texas, Utah, and Oklahoma.